This year is surely to be considered as a memorable one for the members of the Malta Cuba Society. Back in January 2012, the new Cuban Ambassador to Malta Her Excellency Mme Milagros Carina Soto Agüero, visited our country on a three-day stay, to present her credentials to His Excellency Dr. George Abela, President of Malta. 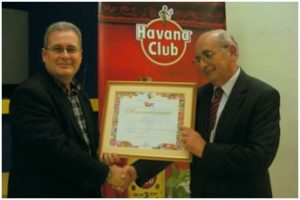 Members of the Malta Cuba Society had the opportunity to meet the Ambassador, residing in Rome, during a number of meetings. The Society also organized a reception on Thursday the 26th of January, in honour of Her Excellency. Here she had the occasion to meet with a number of politicians, government officers, representatives of the cooperative sector, the voluntary sector and other non-government organisations. With them she has discussed a series of possible collaborations between the two countries. During this event, the Ambassador also addressed all the guests present, to express her gratitude to the members of the Society and all those Maltese who promote the friendship between the two peoples.

On the occasion of the 30th Anniversary of the foundation of the Malta Cuba Society, a delegation from ICAP, the Cuban Institute of Friendship with the Peoples, visited Malta between the 15th and the 18th of April 2012. The delegation consisted of Elio Gamez Neyra, Vice President of ICAP and Roberto Rodriguez Dicks, Director of the European Department of ICAP. They were accompanied by the Political Counselor of the Cuban Embassy for Malta, Dr. Fidel Vladimir Perez Casal. The delegation also had the opportunity to meet with representatives of the Maltese Civil Society, including those from the cooperative, the business, the cultural and the trade union sectors, as well as those from the main political parties. The delegation also held a number of talks with Government officers and Ministers during their stay. 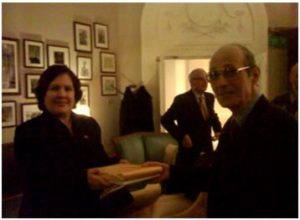 Michael Camilleri, President of the Malta Cuba Society , offering a gift to Her Excellency Mme Milagros Carina Soto Agüero, during the reception held in her honour.

The 30th anniversary of the Malta Cuba Society was celebrated with a reception held at the Workers’ Memorial Building in Valletta on the 17th of April, in which the Malta Cuba Society was given a Certificate of Recognition to mark this important occasion. During a short speech in which Mr. Elio Gamez Neyra addressed the guests present for the reception, he thanked the Society for its hard work to promote the friendship between Malta and Cuba on both a cultural as well as on an economic level, and said that the Cuban people appreciate the solidarity which comes from a small and distant island such as Malta.